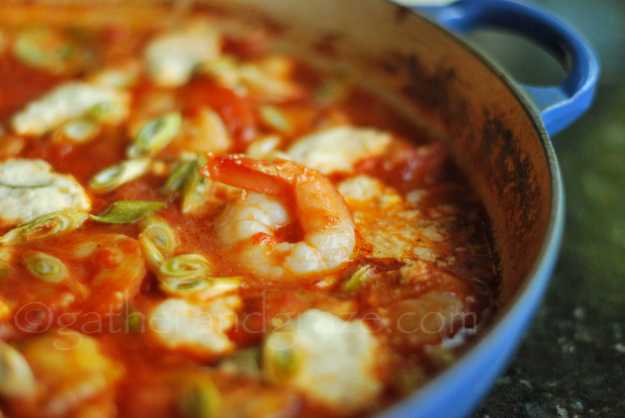 Being aware of how many Ottolenghi fans are out there, I’ll be surprised if there aren’t at least a few of you who have tried this dish already! It’s a delicious, saucy dish that feels suited to any and all of the seasons, packed full of seafood… and flavour!

In a comforting kind of way, it reminds me very much of a Greek dish that my Mum often makes, called ‘Gharithes Me Feta’ (translates to ‘Prawns with Feta’). She’s been cooking it for years… I think perhaps it was a recipe passed on to her from our Greek neighbours who were (and still are…) fishmongers in Adelaide. Now I realise that Mr Ottolenghi has upped the ante somewhat with the addition of scallops, clams and fragrant strips of lemon zest, but somehow I know that deep down I’m going to be just as likely to think of my Mum whenever I make this in future. The flavours seem so attached to her… and to her kitchen.

I made the decision to use Persian feta when I cooked this for the family the other night and despite it’s decadent creaminess, I felt that it melted a little too much into the dish and that a slightly more robust feta would be a better choice in future.

It’s such a wonderful dish… I hope you give it a go.

Bring the white wine to the boil in a medium saucepan and reduce until only a quarter of the quantity is left. 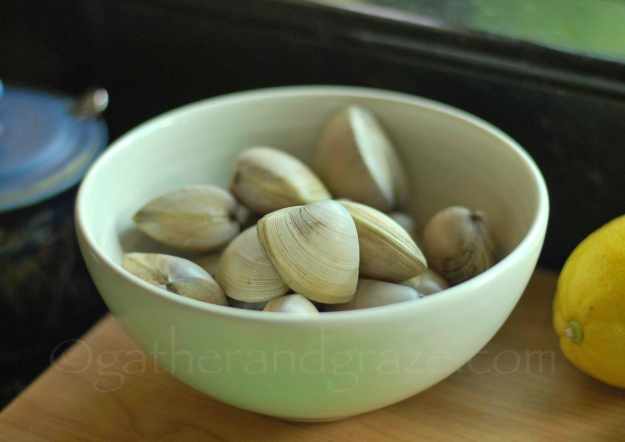 Add the clams to the saucepan and cover with a lid. Allow to cook over high heat for about 2 minutes (shaking the pan occasionally). Check that the clams have opened, before transferring to a fine sieve to drain, being sure to retain all of the cooking liquid (in a bowl or jug) for later.

Remove the clams from their shells, though you may wish to leave a few with shells on for presentation at the end.

Place a large frying pan over medium-high heat and cook the garlic in the olive oil until just golden. Add the tomatoes, clam liquid, sugar, chopped oregano and a grinding of pepper and salt. Using a vegetable peeler, peel off three strips of lemon and add them to the sauce. Allow to simmer gently for about 20-25 minutes until the sauce thickens nicely. Taste for seasoning and be sure to discard the lemon peel.

Add the prawns and scallops and stir gently to coat them in the sauce. Allow to cook for just a couple of minutes. Fold in the clams and transfer everything to an ovenproof dish. Scatter with the feta cheese and spring onions (and any of the cooked clams in their shells) and place into the oven for about 5 minutes, until the top of the dish colours a little and the seafood is cooked.

Remove from the oven, squeeze some lemon juice over the top and drizzle with a little extra olive oil.