What to do… when your cumquat tree decides to bear just one, solitary cumquat? I wouldn’t be asking this question if it wasn’t the most beautiful cumquat I’d ever seen and as it’s the only cumquat my tree has ever deigned to produce, it truly deserves to be celebrated! My little citrus gem is ready to be plucked from it’s branch in the next day or two, before the birds discover my hidden treasure, so your thoughts and advice on how to best savour and venerate this lone piece of fruit would be ever so welcomed! I get the feeling jam is out of the question…

From cumquats to cupcakes… Both, worthy of celebration and each so endearing in their miniature sizing. Though, unlike the cumquat, I’ve had a glut of cupcakes practically spilling out of the oven over the past few days as the Birthday celebrations of our eldest took place. Two dozen decorated cupcakes to share with classmates at school and then another dozen or so (slightly more dressed-up) for party day!

It was perfect timing that I’d done a ‘Cupcake Decorating’ course with a few girlfriends just recently, so unlike the many years gone by, I was now well-taught (though not terribly well-practised) in the techniques of frosting with a piping bag. It was so much speedier (and I must say, a little more elegant…) than slathering them with a palette knife! In our course, we also spent time decorating with fondant icing – forming piggy faces, roses, ribbons/bows and somewhat creepy-looking babies (well, mine was anyway!) A lesson of basic tips and tricks that will be fabulous to know for the family Birthday cakes yet to come. A few Photos…

There really is something indulgent and slightly magical in the eating of these miniature cakes, that can transport you back to childhood in an instant. Something decadent in being able to consume a whole cake, in it’s entirety, in a matter of seconds… without feeling too guilty. The flavours, colours and designs are limited only by your imagination.

Enjoy the following classic recipe for Vanilla Sundae Cupcakes with vanilla frosting, which are then made even more delicious with a topping of melted chocolate and a little crunch from coloured sprinkles. My children loved them… and I must admit, so did I!

Pre-heat the oven to 180°C and place paper baking cups onto a tray.

In an electric mixer, cream the softened butter and sugar together until light and fluffy. Add the vanilla extract and the eggs, one at a time, beating well after each addition. Beat in the sifted flour and salt, in two lots, alternating with the milk until combined. Spoon the batter into the paper baking cups and bake for approximately 15 – 25 minutes (depending on the size of your cupcakes), or until a skewer comes out clean from the centre of your cupcakes.

Allow to cool completely before decorating. The recipe for frosting and tips for decorating are to follow…

Place all ingredients into an electric mixer and beat, initially on slow speed (until the icing sugar has been incorporated into the butter), then on medium/fast until frosting is fluffy.

Using a Wilton 1M Piping Tip (or similar) and a piping bag, pipe swirls over each of your cupcakes, working from the outside in.

To transform into ‘Vanilla Sundae Cupcakes’… drizzle carefully with melted chocolate (I used 100g of good quality Milk Chocolate mixed with 1 Tablespoon of Vegetable Oil – heated gently and stirred over a double-boiler… or extra-carefully in short bursts in the microwave). Top each cupcake with a lolly/candy raspberry (or a glacé cherry for authenticity) and scatter with some coloured sprinkles. 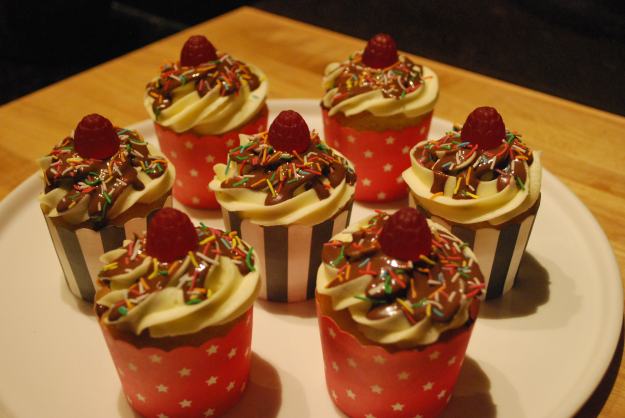 10 thoughts on “Vanilla Sundae Cupcakes and a Cumquat Quandary”

Leave a Reply to The Daily Cure Cancel reply